This information will help those who thinks they may have schizophrenia It aims to create awareness in people, who are suffering from Schizophrenia or think their friends or relatives have its symptoms .

‘Schizophrenia’ is a scary word that has been projected by the media or in films with violence or aggression. But in most of patients such behaviours have been observed, and even who have aggression they can be easily managed by medications Many of the symptoms that are part of schizophrenia will also occur in other disorders – they tend to be called ‘psychotic’ (loosening of touch with reality) symptoms.
Schizophrenia is a mental disorder which affects how you may think, feel or behave.

Its symptoms are divided into ;

What are the symptoms of schizophrenia? 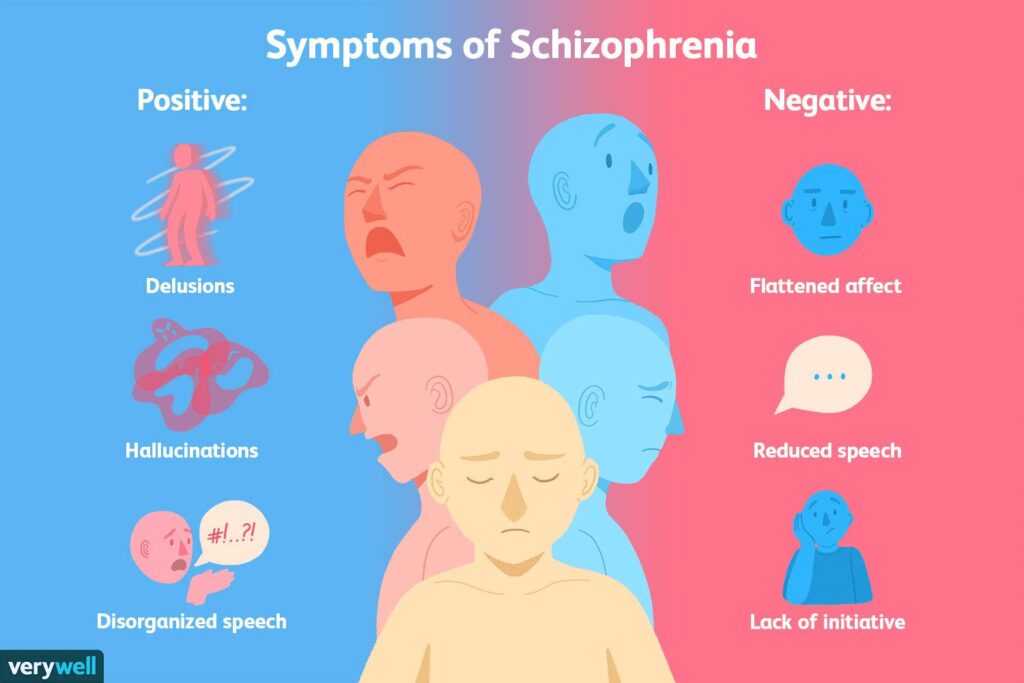 Its symptoms are described as ‘positive’ or ‘negative’. ‘Positive’ Symptoms These Includes delusions and hallucinations, the most florid and known types of symptoms of schizophrenia. Particular types of delusion and hallucination .These carry Significant weight in the diagnosis and help in distinguishing schizophrenia from other psychotic disorders.

A hallucination happens when you hear, see , smell or feel something but in reality ,there is no actual stimulus (thing) in your surroundings.

They sound absolutely real. They usually seem to be coming from outside you, and you will hear in your ears like a real voice. Voices can talk to you directly or talk to each other about you – it can be like overhearing a conversation. They can be pleasant, but often are critical, abusive or just plain irritating. They might talk like running commentary , like sports matches , every step you take or doing and even might be thinking. These voices will constantly comment on it.

Reaction to these voices?

You may try to ignore them, or start talking back to them – or even shout back at them if they become loud or irritating. You may feel like you have to do what they are telling you. You may be wondering, as if they are coming from hidden microphones, chips or loudspeakers, or the spirit world.

Where do they come from?

Voices are not something imaginary , infact, you actually hear them like real voices- but they are created by the mind. Brain Scans have shown that the specific part of the brain that ‘lights up’, when you hear voices, is the same area that becomes active when you talk, or form words in your mind. The brain seems to mistakesome of your thoughts, or ‘inner speech’, for real voices.

Other conditions in which you can hear voices?

You can also hear such voices in severe depression. They tend to be simple , repeating the same negative or critical word or phrase over and over again.

Other kinds of hallucination

Visual hallucinations ; is to see things which are in reality not there e.g; it may include seeing aliens , spirits or figures looking like real people, etc. These delusions are more common in medical illnesses of the brain or kidney. If this is the sole symptom and its onset is abrupt and severe , you first need to consult a medical doctor as soon as possible. Olfactory Hallucinations ; is to smell something which is not there. E.g; smell of pus coming from own body or rotting dead animals/dead bodies or it can also be pleasant like smell of perfume coming from spirit world etc Tactile Hallucinations ; to feel something which is not actually present. E.g; Feeling of insects on your body or someone touching you while you are awake or asleep.

A delusion happens, when you strongly believe and are completely sure of it. Even if everybody says , you are wrong but still believe that’s true. You have no doubts, but other people see your belief as mistaken or unrealistic

How does it start?

● It may suddenly dawn on you that you really understand what is going on. This may follow weeks or months.
● A delusional idea may be a way of explaining hallucinations. If you still hear voices that talk about you, you may explain it to yourself with the idea that a government agency is following you .

These ideas make you believe , feel persecuted or harassed.
● unusual – it may feel as though ISI or the government is spying on you.
● You may think that people are influencing you with special powers or technology.
● everyday – you may start to believe that your partner is unfaithful.
upsetting – feeling persecuted and is obviously upsetting for you. It can become distressing .

You start seeing special meanings in day-to-day events. It feels as if things are specially connected to you – that radio or TV programmes are talking about you, etc.

● Delusions may, or may not, affect your behavior.
● It can be hard to talk about them.
● If you feel that other people are trying to harm you either won’t do anything or sometimes you can hit back at them.

You find it harder to think or focus , it becomes difficult to: ● finish anything e.g; an article in the newspaper or watch a TV programme to the end. ● keep up with your studies at college. Your thoughts wander. You always drift from idea to idea.

Feelings of being controlled

It is probably a combination of different things, which will be different for different people.

genetic ‘risk factors’ are involved in development of schizophrenia. For example, you might have genetic risk factors that mean you are more likely to develop schizophrenia. However, if you grow up or live in a stable and positive environment this may protect you from developing a serious mental illness.

Brain damage
Brain scans show that there are few differences in the brains scans of some people with schizophrenia Where this is the case, it may be, because of:
● a problem started during birth that stops the baby’s brain from getting enough oxygen
● a virus infection in early months of pregnancy.

Drugs and alcohol
Street drugs seem to bring on schizophrenia.
Amphetamines can give you acute psychotic symptoms, but they usually stop when you stop taking the amphetamines.

Cannabis
The heavy use of cannabis almost doubles the risk of developing schizophrenia.
If you have smoked it often (more than 50 times) during your teens, the effect is even stronger – you are 6 times more likely to develop it.

Stress
Difficulties often seem to happen shortly before symptoms get worse. This may be a sudden bad event like a car accident, bereavement or moving home. A difficult childhood Schizophrenia is more likely if you were neglected, physically or sexually abused as a child.

How common is schizophrenia?
It affects people , around 1 in every 100 over the course of their life.

These drugs block completely or partly , neuron pathways, responsible for the increased levels of Dopamine in the brain .

This included Typical and Atypical antipsychotics.

Clozapine is used and has tremendous effects but due to its severe side effect profile. It is used with caution under strict monitoring in the start of treatment .

It only works, when the patient is partly recovering and delusions are getting shaky. Also in half or full remission to engage people go back to living normal life patterns .It is done through cognitive behavioural therapy (CBT) , Art therapy etc.

No. Many people have the idea that someone with schizophrenia can appear perfectly normal at one moment, and change into a different person the next. This is absolutely not true. ● Having mixed or contradictory feelings about something. ● That someone behaves in very different ways at different times.

Mostly not. But There is a higher risk of violent behaviour if you have schizophrenia, but it is very small compared to the effects of drugs and alcohol.